Previous Next
Facebook tweaks its news feed with new controls

Facebook is adding features to users’ main news feed, including letting them limit comment on their public posts to friends or even specific tagged people.

Facebook will also make it easier to revert to “chronological” mode, with the latest posts displayed first.

The company abandoned this model in 2009, although the option remained buried in a menu, in favour of using algorithms to rank the content shown.

But on Wednesday, vice-president Nick Clegg said a lack of transparency and information available to users had led to mistrust.

And so Facebook has moved its “most recent” option to a new “feed filter bar”, at the top of the news feed, which also allows users to prioritise posts from up to 30 friends or particular pages, a feature introduced in October last year, before reverting to algorithmic content ranking.

Despite the change, Mr Clegg, the former Deputy Prime Minister, said Facebook’s algorithmic content ranking – and personalised advertising – continued to offer “so many benefits to society”.

Comparing its use of algorithms to a romantic couple in which ones does the shopping and the other cooks dinner, he said: “Content ranking is a dynamic partnership between people and algorithms.

“Your news feed is shaped heavily by your choices and actions.” 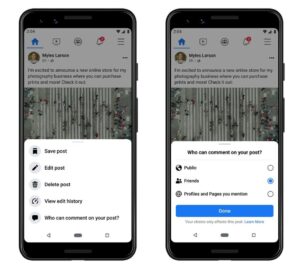 In a further bid for transparency, the news feed’s “Why am I seeing this?” links will now detail the criteria for recommended posts – from people and organisations users do not follow – such as having recently interacted with a similar post.

The new controls would be available for Android app users first, Facebook said, with an iOS update for Apple phones in the coming weeks.

Read also: Vaccine passports could prove to be a privacy minefield for regulators , How bees and drones team up to find landmines, Flights after COVID-19 Lockdown